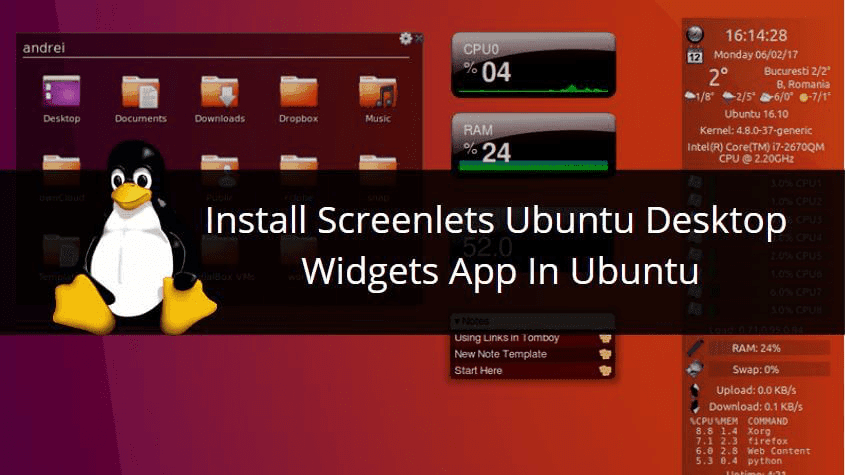 As we know that the majority uses either windows operating system or Mac operating system, but there exists a significant number of people that use the Linux ubuntu operating software. Now adding widgets is one thing that serves two purposes: getting handy reach for applications and software and for giving a neat and an organized look to your ubuntu desktop with the help of ubuntu desktop widgets. Conky becomes that one such easy method that you can use for getting Linux desktop. Though this type is a little bit technical and complex, especially for those who are new to using the Linux operating system.

Another way is via screenlets which is an open-source python-based tool that is used to add widgets to the ubuntu desktop and also other screenlets like RSS readers, weather countdown, folder view, sensors, countdown, calendar, etc. that is pretty much like the widget screen you will get in conky. Yet conky still preferred over other methods that are involved in ubuntu desktop widgets as it comes with many features like reporting the current usage of CPU, about your computer memory, your disk storage, the temperature of the monitor/laptop, how many users are logged in, currently playing song, etc. all in the form of a little widget on the side of your screen.

Why Use Conky For Ubuntu Desktop Widgets?

Despite the complexity that it carries, it is the preferred choice for most linux users because of the sleek and classy interface that it carries. It is extremely lightweight and easily configurable without appearing as if it does not belong to a monitor or give a negative impact to the viewers.

How To Enable Ubuntu Desktop Widgets With the Help Of Conky?

With conky program that can run all time that never stands out from the desktop, people want it to open whenever the computer system boots. Therefore, To add ubuntu desktop widgets with conky, follow the steps given below:

As you have done setting up conky on your ubuntu desktop, then go to conky’s universal configuration file that is located in etc/conky/conky.conf. Therefore if you’re looking to make universal changes, work directly with this file as editing as this will change entire settings for every user. Otherwise, if you want to edit the settings for your specific user, then first create a single user-defined Conky configuration file : /etc/conky/conky.conf ~/.conkyrc To apply and implement the above changes, you would have to reload and reboot your desktop and then again log out to log in again. Then again use a text editor and open the configuration file to open it with gedit: $ gedit ~/.conkyrc

Apart from this, you can configure more and add more widgets to the ubuntu screen of your desktop. Here are some other configurations to get a polished look.